In what country were the first modern Olympics held?

On April 6, 1869 the first recorded Olympic game was held at Olympia in the city of greek.

Earlier Olympic games were limited to foot races but later the other games were also added like wrestling, boxing , races, gymnastics, shooting , Weightlifting and other competition. The international Olympic committee was formed and the first Olympic games was played in Athens the capital of Greece or Greek in 1896.

In Athens 280 participants from 13 nation were competed in 43 games. 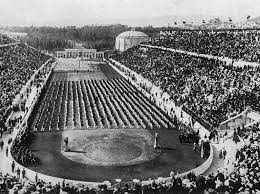