Isn’t Sonam Kapoor’s wedding surfaced too much on social media?

Yes, it’s true. I agree to your post. Every little detail of their wedding is out on social media platforms. People have seen more photos and Sonam Kapoor wedding than their own.
4 0
K

Yes, it's very much true that Sonam kapoor’s wedding stuff has occupied  the social media platforms. Be it twitter, Instagram or facebook but, Taimur (son of Kareena Kapoor Khan and Saif ali Khan) has  also surfaced the social media while attending Sonam kapoor's wedding. The youngest Nawab was colour co-ordinated with his father and mother.

Also, the pictures and videos have already on the social media, and users are very much indulged into it. All the looks of the bride were so mesmerizing that one couldn't take her/ his eyes off. Sonam Kapoor and Anand Ahuja tied the knot according to Sikh traditions on Tuesday. Donning a traditional red lehenga with heavy ethnic jewellery and minimal makeup, Sonam Kapoor looked like a perfect bride as she seemed all set to welcome the new phase in her life.

Her groom Anand Ahuja, too matched up to the fashionista's style statement in a beige achkan and a traditional turban, added on with a beautiful neckpiece. After the grand wedding they hosted the reception too where all the celebrities were invited. So, it's evident to say that social media is full of Sonam Kapoor, Anand Ahuja and yes Taimur Ali khan, too. 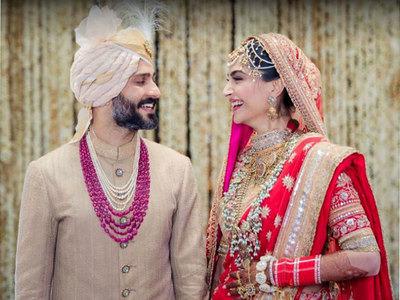