Rajdeep Sardesai, Arnab Goswami, and Ravish Kumar – Who is better?

Who would have thought there would come a time when general malaise and a potential threat to the society would come not from the aggressive, power-hungry politicians but rather the cult-like individualities of journalists-cum-news anchors.

Yes, while the number of news outlets has spanned exponentially, the real news has receded back to the words and writings of select few-- those who can sit in their Primetime shows every night to either make a mountain of a molehill or not even address the mountain.

The three names that sit prominently in the Indian media conjecture are Arnab Goswami, Rajdeep Sardesai, and Ravish Kumar. Renowned personalities, falling at the extreme ends of right and left wings, no more conventional journalists but a mouthpiece of government and a different section of the society (depends which side of the line you’re standing on).

The One Who Sold His Soul

Arnab Goswami, indeed, changed the entire scope of Indian television media. On a mission to end the hegemony of global media powerhouses like BBC and CNN with his own start-up Republic TV (or at least that what he says), his shrill echoes of “the nation wants to know” did reach the elite households and wooed the urban news consumers. Before 2014, part of Times Now, the unique style with the unparalleled aggressiveness to question those in the power was, from every angle, a delightful spectacle.

Who could forget this, an antagonistic and refined rendition of TayTay’s “We’re Never Ever”?!

It is one of few Mr. Goswami’s heroic episodes to demolish politicians that made him a renowned name and established a new genre in the news media that others fought to chase, from (then NewsX and now Times Now’s) Rahul Shivshankar to India Today’s Rahul Kanwal.

However, post-2014, Mr. Goswami seems to have lost his voice. More so after the launch of his channel where BJP MP Rajeev Chandrasekhar is the biggest investor. In a couple of his cringe-worthy interviews with Prime Minister Narendra Modi, his aggressive persona took a meek turn, cowering and salivating in the face of “chappan inch ka seena” (56 inches chest). 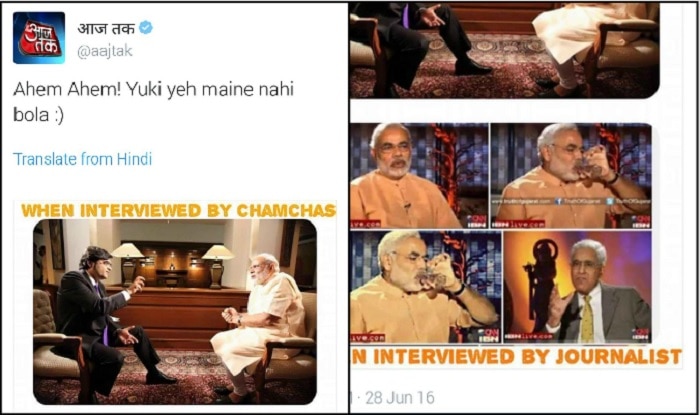 As it stands now, not only Mr. Arnab Goswami has ended up selling the core ethos and decency of journalism in his quest to be the government’s mouthpiece, he has also sold his soul.

The One With An Easy Target On The Head

Rajdeep Sardesai is one of India’s topmost journalists who actually make sense when he speaks. However, even with his undying workhorse-like persona, he’s an easy target—at least in this BJP-led era and among the digital goons on Twitter. And it is quite fitting, given his quaking relationships with PM Modi.

When Gujarat Riot broke out under the leadership of Narendra Modi and thousands of people lost their lives, there were a handful of journalists who did what they were supposed to do—report and question. And needless to say, with blood in his hands and nature that doesn’t like answering “tough questions”, Modi and his followers started despising these journos, which aside from Rajdeep Sardesai, also included Sagarika Ghosh (his wife) and Barkha Dutt. And the rest has been pretty much evident in the public, with Mr. Modi leaving no chance of humiliating and ill-treating Sardesai.

Here’s one of the short conversations between them during the runner-up to 2014 general election, where Sardesai was made to sit on a small stool in a bus, near the feet of Mr. Modi (he has talked about this even in this Book)-

The whole relationship between the two has made Sardesai a soft target in this nation, the majority of which is under the BJP rule at the state level. Getting abused, made fun by the right-wing goons and even harassed publicly, no doubt the past 4 years under Modi-rule, it has been pretty difficult for Sardesai. But even then, appealing highly to the middle-class family, we have seen him hold his integrity and present the best of journalism every time. The best part? Unlike many of his counterparts, amid all the threats, he still does ground-reporting.

The One Who Everyone Loves

Who would have thought a person from Bihar with in-proficiency in English would one day become India’s most popular name in the news and media scene. Ravish Kumar, a Hindi-speaking news anchor, has outdone every expectation when it comes to bringing social change through journalism.

A favorite among the lower-class population who brings the best of wit and an unmissable style in his reportage, Ravish is known to talk on issues rooted to the ground level, from poverty to unemployment. Issues related to farmers and students are his go-to. And this has created a distinct space for him, inducting him in his own class in the upper echelons.

His recent series on employment, and before that a series on universities and fake news, has won him accolades from across the spectrum, wooing not just his core audience but also the elite viewers who “frankly speaking” are now looking for news over the noise.

Not just in India but around the world, Ravish’s now infamous black screen episode during the JNU controversy is now credited as one of the finest examples of TV journalism. If you haven’t watched it, here’s a link:

Ravish is known to ask tough questions to the authorities. And while this appealed BJP before 2014, they aren’t much of his fan now. In fact, BJP’s spokesperson has been boycotting Ravish’s Primetime show for 2 years now. And with BJP (hushedly) against him, he has been constantly targeted by the Twitter trolls and goons army, even threated for his life.

Without an iota of doubt, English or Hindi, Ravish Kumar is a name that everyone loves. In the surging crowd of jingoistic and hula-hoop journalists, he is one of few individuals in news and media industry who talks about issues that actually matters.

When compared side-by-side, it’s hard not to manifest that these three news anchors, sitting at the epitome of this industry, have very different personalities, target audience and goals.

Arnab Goswami appeals the (diluting) crowd of elites and extreme right wings who knows nothing beyond Pakistan, Hindu, and Muslim. Rajdeep Sardesai, on the other hand, is one of those journalists who has been keenly struggling in the BJP-rule state to even enjoy his basic right to live. He targets the middle-class population but now has been extremely conscious to not bug those ministers in the power.

And then Ravish Kumar, although on the same side of the rope as Sardesai, is much more outspoken about the general state of affair. He has been more critical to the Modi government, irrespective of the personal attacks hurled on him. And unlike others in this industry, Ravish enjoys much higher goodwill not just from his lower and lower-middle class audience but also from the elite class.

These are three names who are redefining the boundaries of Indian Journalism. Whether it’s for general good or bad, it depends on who you support.