What did Himachal Officials say after the Cloudburt in Dharamshala Himachal Pradesh?

Flash floods are quite a regular occurrence in the town of Dharamshala, and unfortunately, the most recent deluge is not an exception. This time, however, it has been exceptionally severe, with cars and buildings being swept away due to the ferocity of water currents.

Dharamshala is situated at a height of 3200 meters above sea level and is known for its scenic beauty and natural scenery. Due to its geography it is subject to unpredictable weather patterns which have led to many flash floods in recent years. 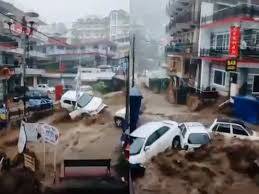 The sudden deluge has left not only its mark but also caused a lot of damage to local homes and personal belongings. The incessant rain led to several streets being flooded with flood water in just one hour's time .A fresh spell of heavy rainfall has brought the northern regions of Himachal Pradesh to a standstill as over 2000 people are reported to be stuck in Dharamshala, Dalhousie, and other districts due to flash floods following in 30 hours.

The Indian Meteorological Department officials deny that it can be attributed to cloudburst but admit that there has been very heavy rainfall. The India Meteorological department can confirm that there was no cloudburst as per its records and a thunderstorm warning was issued by IMD based on radar observations which is done to alert people at risk areas of heavy downpour as it could lead to flash floods or lightning strikes which could cause public panic or loss of lives .

A flash flood triggered by the abnormal monsoon weather over the weekend had submerged entire areas under mud and water, triggering fear among locals, who are struggling to come out of the waters even now. The worst-hit area was Dharamshala, home to a large number of tourists that visit annually to pay obeisance at the Chhimba Mata temple. On Tuesday morning, locals in Dharamshala found themselves struggling for survival as they waded through waist-deep waters trying to reach safety on higher ground or rescue those trapped in houses. In total, 40-50 people have died since Monday's flash floods hit Himachal Pradesh's tourist destination.

The worst in a decade, caused widespread damage with many people being killed and several injured. The rains triggered flash floods in the region, damaging buildings and crops.