What is menstruation and menopause ? - letsdiskuss

What is menstruation and menopause ?

In girl with puberty, the ovaries start releasing matured eggs. There are two ovaries which are situated inside the abdominal cavity.

They produce one mature ovum each after every four weeks. The proces which a mature ovum is released from an ovary is called ovulation.

During period, the wall of the uterus becomes thick and this is a preparation to receive the fertilized egg if it so occurs. But if fertilization does not occur, the released egg, and the lining of the uterus along with its blood vessels are shed off. This causes bleeding called menstrual flow.

At 45 to 40 or 50 years of age, the menstrual cycle stops. The stopper menstrual flow and the other associated events in the body of a female is called menopause. 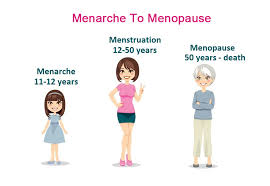