What is the future of the Indian automobile industry? - letsdiskuss

What is the future of the Indian automobile industry?

The Indian vehicle advertise is tipped to turn into the third biggest on the planet by 2020 as per assesses by Ernst and Young.

Car area has been opened up for FDI long back. Daimler BMW and so on are on the whole 100% backup of their parent organizations with no nearby accomplices.

The worldwide car amusement will be essentially chosen by twin powers for China and India.

The new government's endeavors to actualize a GST, construct brilliant urban areas, and resuscitate key parts, for example, mining and foundation should support work creation. Other key variables for significant development are higher spending on framework and the administration's emphasis on rustic regions.

Truth be told, we anticipate that the India car deals should surpass the US showcase by mid 2030s

The designing R&D administrations advertise is required to be having some fantastic luck with expanding enthusiasm by the worldwide organizations to set up their hostage R&D focus in the nation.

Though India as a market is huge but the income inequality has a role to play. The gdp of the country is growing at the fastest in th world but the per capita income is very low due to huge population. Majority of the population belongs to the middle class. So particularly in Four wheeler market the growth of low priced vehicle is more. Thus the demand of luxury cars is not that much. 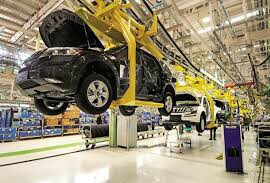 Take the case of our own Jaguar, the company has been struggling with huge losses quarter after quarter not only domestically but also globally. The share of Tata Motors plunged very steep when the annual performance of the company is put on the website.

One more fact, the indian vehicles safety standards are very low amongst the world. Our cars which are considered to be the safest dono even pass the foreign safety standards. This is the major reason where internationally our vehicles lag behind.
Moreover, domestically also the vehicles sales dropped by a huge percentage in March which may blur the future prospects.

It is true that, the demand is huge domestically as well as internationally and Indian Automobiles have a huge opportunity to grab up to give touch competition to the international rivals. For eg: Mahindra and Mahindra's share has been rising due to the new SUVs vehicles launching every year with new and innovative features. Baja's two wheelers especially Pulsar made a record 1 crore bike sale.

So the future prospects are good, now let's see how the industry responds to this!!
0 0