What is the significance of friendly match between Brazil & Croatia in FIFA world cup 2018? - letsdiskuss

What is the significance of friendly match between Brazil & Croatia in FIFA world cup 2018?

Only 10 days are left for the world's sport Extravaganza,  the FIFA world cup 2018 to begin in Moscow, Russia. As the warm up and friendly matches are going on, foot ball fans watched a wonderful match between Croatia and Brazil yesterday.

People were eagerly waiting to see the match because of the return of Brazil's star player Neymar.  Just 98 days back he had a foot injury and his playing in FIFA World cup was doubtful. But he was back with a ***** and gifted a goal to Brazil at Anfield. The  Paris Saint-Germain F.C  forward player was half time substitute for Manchester city midfielder Fernandinho . And Neymar showed his importance to the Brazil tem as it is playing for its 6th FIFA World cup title. Neymar scored a splendid goal after 68th minutes of the match in his first outing of the season.

In the first half relatively there were few chances and  the spirit within the game was not understated and Ivan Perisic of Croatia and Fernandinho of Brazil were booked by the referee in a crabby end to the first half.

The Brazilians were in desperate need of a goal when Firmino replaced Gabriel Jesus on the hour. After 68 minutes Neymar cut into the area, ahead of Sime Vrsaljko and Duje Caleta-Car with impressive close control before sending the ball inside the net. Neymar ran behind the goal, in front of Anfield's legendary Kop End, and punched the air in obvious delight as he was circled by his team-mates.

Roberto Firmino of Liverpool completed the victory by a goal in his home ground in stoppage time.

The world's most expensive player Neymar is talk of the sports world even before the FIFA world cup 's start. 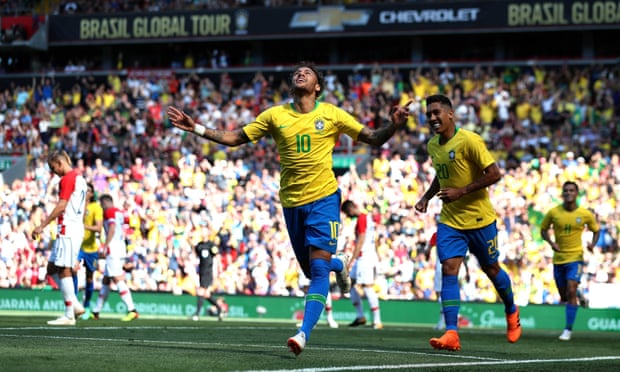