What is triggering riots in Sri Lanka? - letsdiskuss

What is triggering riots in Sri Lanka?

A series of protests have been happening in Sri Lanka over the past three weeks, including looting, arson and violence.
The root cause of these violent riots is unknown. What is known is that they have spread across the country and have had a significant impact on the lives of ordinary people. Roads were blocked by traffic, schools were closed and hospitals were overwhelmed with patients from more than 100 different locations throughout Sri Lanka as a result of rioting occurring in other areas. The protests are also known to require a disproportionate amount of policing resources to maintain order, as well as lead to increased political tension between the government and the opposition party. 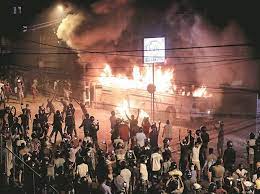 A nationwide state emergency has been imposed in Sri Lanka to prevent attacks on Muslims and communal disturbance for 10 days. According to a report, this all started after the death of a Sinhalese truck driver that was killed by a group of Muslim men in a road rage incident.

Raged Buddhists in the reply set fire to Muslims houses, shops and killed a young Muslim boy. Sri Lanka has been in turbulent state and the angry mob can be seen on the roads. Actually, Sri Lanka has a variety mix of ethnicities and religions that make their home on the island and anti-minority clashes are very common.

These Riots have highlighted the country's 26 year long civil war that was ended in 2009. Sri Lanka was trying to recover from the past violence and this instance shocked the whole nation. According to sources the communal disturbance is a repeat of rioting four years ago, and, since then, there has been rising tension between Buddhist and Muslim communities.