What is your take on new Bajaj Avenger 180? - letsdiskuss

What is your take on new Bajaj Avenger 180?

Bajaj Avenger 180 is the latest bike from Bajaj that promises to offer an unbeatable performance at a price point that is sure to attract a lot of business. The bike features an all-new engine, fuel injection system and twin gear transmission with five speed options, which will allow the customer to ride faster than ever before. It also comes with a host of new features such as self-cancelling indicators and state-of-the-art suspension system.
The bike has been modified with a 180cc motor from the Pulsar 180. The air-cooled 178.6cc engine produces 15.3hp at 8,500rpm and 13.7Nm at 6,500rpm. 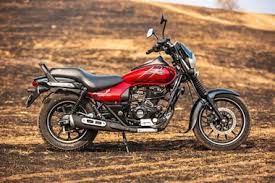 In the world of classic biking sensible customers always keep their brains set-up what they want and looking at the newly launched Bajaj avenger it seems like they have got what they wanted.

The new Avenger 180 will come with new features and be reloaded with more power and it is believed that Bajaj Auto is going to strengthen its grip in the classic bike segment, and that's why the company has removed the curtain from AVENGER Street 180 and equipped it with a much stronger engine and many advanced features. The company has given 180cc engine in this bike, so that the rider has more power now.

Bajaj has placed a new headlamp at the new Avenger Street 180, new graphics and black alloy wheels that gives it a totally sporty look. On the launch of the bike, Mr. Eric Vass, President of Motorcycles Business, Bajaj Auto Limited said, "Bajaj Auto as a segment leader and they are determined to make motorcycles better and better." Avenger Street 180 is styled for today’s generation and with styling Bajaj kept in the mind to give it a powerful engine.

I love this bike, and also owe avenger150.

May be avenger 180 will have some new features, i am looking forward to it.