Which year did virat kohli debut in international cricket?

Virat kohli is a current captain of indian team and royal challengers Bangalore in indian premier league.He is one of the finest batsman in world cricket and a great captain he broke many records in captaincy like winning test match in Australia and ahead in england test series.He debuted in 2008 vs srilanka which was not good for him  he made 12 runs and get out and now its been 13 year of his playing and broke many records and compared by sachin tendulkar.He is one of the best batsman india could ever get. 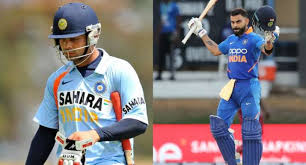