Who is Anupam Kher? - letsdiskuss

Who is Anupam Kher?

Anupan kher is the most famous Indian actor and also the formal chairman of Film and television institute of India. He has done approx 500 films in cinema. He is born on 7 March, 1955 in shimla, punjab, India. he has married to kirron kher. He is so famous director, producer, actor, and also teacher. He has also awarded with many awards. Ho won the filmfare award functions too. He is a well famous and successful actor.

Anupam Kher is an bollywood actor and the former chairman of film and television institute of India.He  appeared in 500 films in the Hindi language. He won two National Film Awards and eight Filmfare Awards.Anupam kher was born on 7 march 1955 in Shimla India.He is one of the versatile actor a bollywood industry has ever had.He lost his hair at an early age of 29 and thus his first role was playing a 65 year old at the age of 29.He is the best actor of all time. 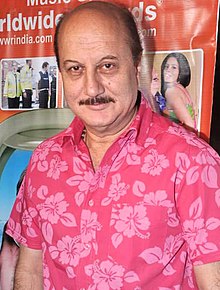