Metro Train is second most used train after local train in india and many other countries metro train are the lifeline the metro train runs on microcontroller and also with receiver and the voice recorder chip with speaker . The whole system is attached to the vehicle third rail mounted at track level and contacted by a sliding pickup shoe they get the from exposed electrical line would cause carbon monoxide.

Metro trains are powered by an exposed electrical cable also known as the third rail, that runs alongside the train vehicles' two rails. Because the exhaust in enclosed train tunnels as well as stations would induce carbon monoxide poisoning, the metros do not use hydrogen combustion engines. METRO is made up of a microprocessor, an RF receiver, and a speech recording chip with a speaker. The car is connected to the entire system (Train). The train moves when the project is energised until it comes across an RF card put beneath the track. 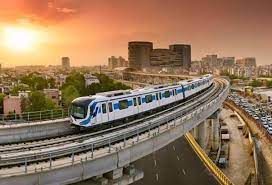